Week In Perspective: A Tradition Unlike Any Other - THE MASTERS & Markets Rally as Nasdaq Leads

The S&P 500 (+2.7%) and Dow Jones Industrial Average (+2.0%) kicked off the week with a data-driven rally to new heights, followed by a mechanical grind higher the rest of the week. The Nasdaq Composite (+3.1%) outperformed with a 3% gain, while the Russell 2000 underperformed with a 0.5% decline.

Ten of the 11 S&P 500 sectors ended the week in the green. None were more influential than the information technology (+4.7%) and consumer discretionary (+4.2%) sectors, which rose more than 4.0% amid strength in their mega-cap components. The energy sector (-4.1%) was the lone holdout with a sharp 4% decline, as investors took profits.

On Monday, the market keyed off a strong employment report for March, which was released the prior Friday when the stock market was closed, and a record-setting ISM Non-Manufacturing Index for March. The data indicated that the economic recovery is gaining momentum.

What's more, JPMorgan Chase (JPM) CEO Jamie Dimon said in an annual shareholder letter on Wednesday that an economic boom could easily run into 2023. Market reaction to this observation was muted, though, as the market was stuck in consolidation mode. Mr. Dimon also cautioned about the "not-unreasonable possibility that an increase in inflation will not be just temporary."

At the end of the week, the Producer Price Index increased a hotter-than-expected 1.0% m/m in March (Briefing.com consensus +0.5%), bringing its yr/yr increase to 4.2%. The market stood by the Fed's thinking that an increase in inflation would be transitory.

Speaking of the Fed, the central bank's dovish monetary policy was reaffirmed in the FOMC Minutes from the March meeting and by Fed Chair Powell at an event hosted by the IMF this week.

Underlying positive factors for the mega-cap/growth stocks included a recognition that long-term interest rates have cooled off this month, money continuing to reshuffle into these Q1 laggards, and investors possibly front running Q1 earnings reports. The 10-yr yield decreased four basis points to 1.67%.

The Masters Tournament is one of, if not the, greatest sporting event to attend. From the different colors of green, to the azalea trees blossoming, to the patrons (pre-covid) and of course the golf, Augusta National is a slice of heaven-on-earth.

If you weren't near a TV, were too busy getting things done around the house, or simply don't aren't the biggest golf fan, I wanted to link a great recap video of what you missed over the weekend. 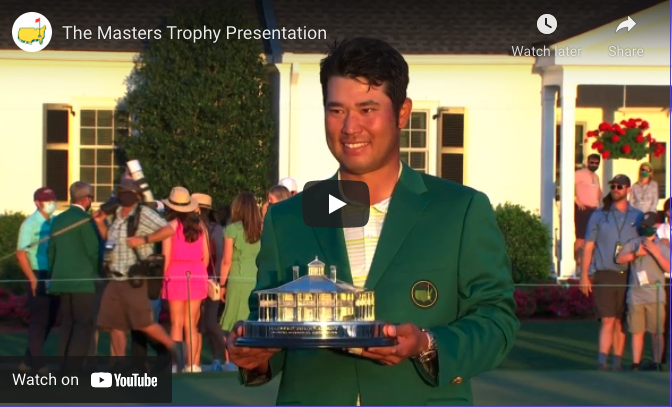 As you can see, it was a spectacle to watch (even without Tiger playing)! Congratulations to Hideki Matsuyama, who made history on Sunday as the first male golfer from Japan to win a major championship.

Also, a huge congratulations to Will Zalatoris, who finished second in his first Master's appearance. Will was trending on social media this weekend for his remarkable resemblance to the young man who caddied for Adam Sandler in the infamous golf comedy Happy Gilmore. As you can see from the picture below the resemblance is indeed close. Even Adam Sandler joined in on the fun. 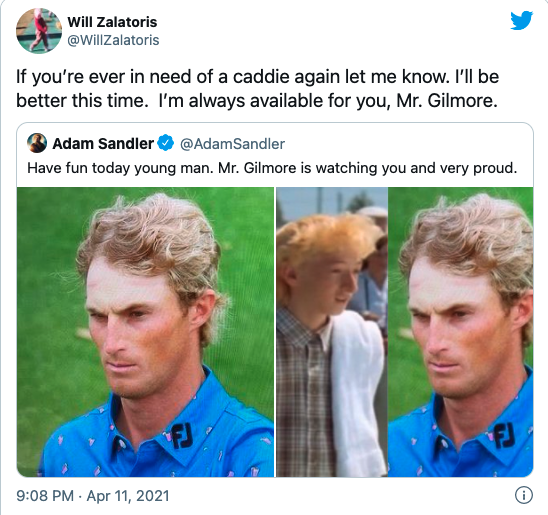 In closing, I wanted to share one more thing that proves The Masters is truly awesome. Whether you're a golf fan or not, I'm sure you can appreciate Augusta National's concession prices. Too bad all sporting events don't follow suite! 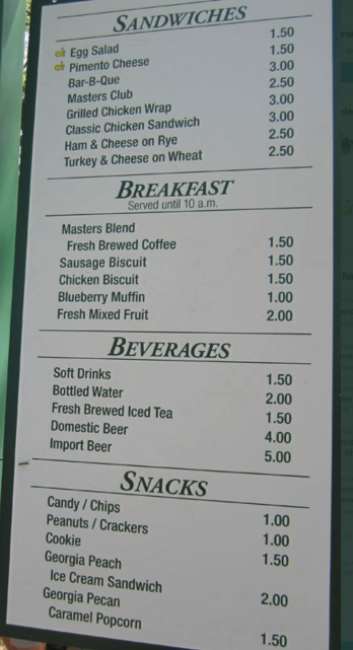 *Past performance does not guarantee future results.

*Indices are unmanaged and do not incur fees, one cannot directly invest in an index