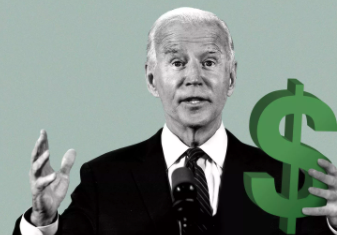 Starting with some perspective, the S&P 500 was up 7.0% over the prior four weeks with roughly 95% of its components trading above their 200-day moving averages. Sentiment had gotten really bullish, too, giving credence to the view that the market was due for normal sideways action or a pullback.

The market took the former route, seemingly allergic to selling interest. There was one day of noticeable selling, though, and that was on Thursday after Bloomberg reported that President Biden was planning on proposing increasing the capital gains tax rate to 39.6% from 20.0% for those earning $1 million or more.

This rate would be bumped to 43.4% when including the 3.8% tax on investment income that funds the Affordable Care Act -- and that's before state taxes are applied. Based on the facts that The New York Times published a similar report earlier in the day and that this was a part of the president's campaign, the news was viewed a convenient excuse to take profits.

True to recent usual form, though, investors bought the dip on Friday amid optimistic undertones that comprised of speculation that negotiations could reduce the rate, strategies to work around the taxes, and observations about the market's historical ability to weather tax increases.

In other key developments, earnings reports continued to beat expectations for the most part, weekly initial claims fell to a new post-pandemic low at 547,000 (Briefing.com consensus 600,000), and new home sales surged to its highest annual rate (1.021 million) since August 2006.

The 10-yr yield was unchanged at 1.57% in a tight-ranged trading week. 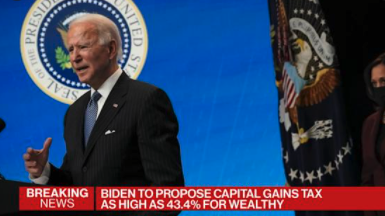 Last week, President Biden "dropped the mic" during a news briefing where he stated that he will be looking to propose DOUBLING the tax rate that "wealthy" Americans pay on investment returns when they sell stocks, bonds, or other assets. Let's look at what this could mean.

Anyway..... back to Biden. Biden is expected to unveil this proposal this week as a way to fund the American Families Plan, which would expand subsidies for child care, and make community college tuition free for all, among other things.

What is Biden defining as "wealthy":

Biden is ultimately hoping to keep his campaigning promise of not raising taxes on Americans who earn less than $400,000 a year.

The changes to capital gains tax being proposed are for those who are in the highest tax bracket (which is also being expected to jump to 39.6% from the current 37%) who make more than $1MM in gross annual income. Those who fit this criteria could be paying capital gains, regardless of length held, of 39.6%. Also, Biden would keep the Medicare surtax in place that currently sits at 3.8% (see below for Medicare surtax thresholds) on investment income. Therefore, the "wealthy" earning more than $1MM per year, could see capital-gains go all the way to a staggering 43.4%!

As this is in the "possible proposal stage" and isn't set in stone, there will undoubtedly be more information to come in the near future. However, those finding themselves under the "wealthy" definition may want to prepare for upcoming tax law changes that could effect their investment portfolios.

P.S....Biden also mentioned he is looking at changing the "step-up basis" that could be even more of a detrimental tax law change. More on that in the future.

**Past performance does not guarantee future results. -Indices are unmanaged and do not incur fees, one cannot directly invest in an index